Have you seen The Haunting of Hill House on Netflix yet? It was a pretty good show, except my roommate has been annoyed by my sleeping in the living room with the lights on and The Office playing in the background for the past two weeks… I wouldn’t say I love scary movies, but I definitely consider getting “scared” a good form of entertainment. Watching scary movies is a group activity (at least for me, since I would never EVER watch one alone, are you kidding me?!) that really brings people together. Some of my fondest college memories are of October in my sorority house, where there would be a huge group of girls watching a scary movie in the living room every single night of the month. Our collective screams were so loud that the neighbors probably thought there was an actual murder happening inside. More recent memories include staying in and watching Sinister on a laptop with some fellow travelers, and of course, my annual pre-Halloween movie marathon. In all of these situations, I am definitely that person who screams when nothing has even happened, which in turn makes everyone else jump. My friends love going to the movie theater with me… Anyway, here are five scary movies that I would like to highlight this Halloween: 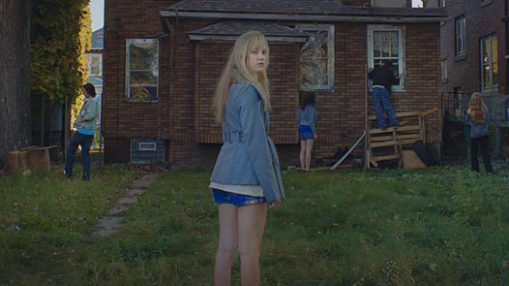 It Follows is an all-around brilliant movie in any genre. It leaves you thinking even after the end, and the more you think about it, the better it becomes. A supernatural, murderous entity, passed down from person to person via sex, follows its next victim, but it can only move at the speed of a walking human. The genius of this film is not only its portrayal of certain themes, but the way it maintains the most unsettling feeling the entire time. It’s impossible to tell which era the movie is set in. The characters watch shows on a TV from the 60’s, yet use electronic devices that don’t even exist. Very bizarre. Available to stream on Netflix.

Hereditary is the most traditionally scary and scream-inducing out of all of these. It’s similar to other haunting, demonic coven movies, but this one connects those horrors with the real life scares of inherited mental illness. Still extremely terrifying, though. I can’t remember ever seeing a scary movie with such an unexpected moment as the one that occurs in this film (if you’ve seen it, you’ll know what I’m talking about). There truly is something for everyone. Also need to mention that Toni Colette is amazing at everything she does. Not yet available on Netflix, as it just released this summer.

The Witch is a slow-burning candle of a film. A religious family in 17th-century New England settles into their new farm, after being banished from their former Puritan clan. Evil seems to lurk in the surrounding woods, but only becomes evident a little at a time, allowing paranoia and doubt to take hold of the family. Typical A24, there are a lot of shots of nature to build the suspense. Don’t remember screaming during this one, but I probably did at inappropriate times. Available to stream on Netflix.

Raw is a French film (with subtitles) and is not scary per se, but definitely creepy and at times disgusting. A vegetarian tries meat for the first time during her first week of vet school, and it all goes downhill from there. It’s a coming-of-age story with social commentary and a lot of blood. The full package! If this movie is based on true events in their schools, then the French have even more intense hazing rituals than the American fraternities you read about in the news. Did not scream at all during this. Available to stream on Netflix.

Creep is a fun one. A man posts an online ad with a request to be filmed at his house for a day, and guess what? He turns out to be a real creep! But I won’t spoil how, exactly. Do yourself a favor and watch. You’ll laugh, you’ll cry, you’ll scream (if you’re me). Available to stream on Netflix. And there is already a sequel that is supposed to be good.